CLUB OR COMMITTEE –
WHAT’S THE DIFFERENCE?

At 32 years old, the Somers Democratic Club is one of the largest civic groups in the town of Somers, NY.  Our efforts have played a major role re-establishing a two party system in Somers Town Government.  An Executive Committee and seven at-large members along with our Democratic neighbors help with community events, fundraising for local candidates, get-out-the-vote efforts as well as seeking and supporting viable Democratic candidates for election.

The Somers Democratic Club was founded in 1988 to encourage Democratic participation in the civic affairs in Somers, NY, Westchester County, New York State and in the United States Government.   With over 400 members, our activist organization works toward the betterment of all our citizens. We support the Democratic Party’s values and nurture social interaction among Democrats.

We welcome all registered Democrats living in Somers, NY, to become dues paying members of the Somers Democratic Club.  Your dues help support our civic activities and Democratic candidates. We have donated $1,000 toward the Somers High School Concession Stand, sponsored the town Energy Expo, purchased a 'Leave a Legacy' gold brick for the Somers Booster Club, contributed to the annual Independence Day fireworks, was a Gold Sponsor of the Somers Library Fair giving $1,000 to help our community's library, contributed to the Somers Land Trust, donates and organizes a fund raising team for the American Cancer Society Relay for Life and supports the Somers Educational Foundation.

One of the important roles the Democratic Club plays in conducting candidate forums for the public.  The gallery below is from the 2012 Annual Meeting that took play on May 22 at the Somers Public Library in Reis Park.  Democratic candidates for NY State Assembly, NY State Senate, primary candidates for the US House of Representatives and Richard Clinchy of Somers Town Council were in attendance to talk about important issues facing us in the upcoming. 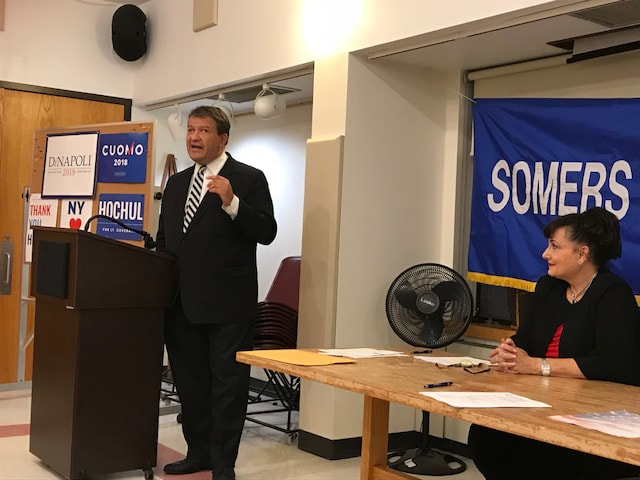 Somers Democrats have served and are currently serving on many boards and committees in town. The Planning Board, Zoning Board of Appeals, Energy Environment Committee, Emergency Preparedness Committee, Affordable Housing Board, Somers Library Board, Friends of the Somers Library and the Parks and Recreation Board.

The Somers Democrats have always been about putting forward ideas and policies that move Somers forward. From emergency preparedness, to making a more walkable town, to a more cost-efficient government, to advocating for more grants, to a host of others advances, the Somers Democrats have always put the Town first, and politics second. Although, we haven’t won as many elections as we’d like, we have made our mark on behalf of Somers and we will continue to do so.

I hope that in future elections Somers voters will take a look at the qualifications and resume of a candidate and just not vote party line. Democrats have a lot to offer the residents of Somers.

For 31 years the Somers Democrats have been a significant and successful participant in the civic, social and political life of Somers. Our list of achievements, accomplished for the benefit of every town resident, is long. We donated funds to support special projects for the children in our district, including the creation of the schoolyard habitat at SIS and equipment for the Media Dept. at SHS and 2 Somers Summer Camp Scholarships. We have supported the Somers Library, Somers Library Foundation, Somers Volunteer Fire Dept., Somers Women’s Club, Somers Education Foundation, Destination Imagination teams, SHS Concession Stand, Somers Independence Day Fireworks Display, Somers Energy Expo, American Cancer Society Relay for Life, Somers Booster Club, Somers Food Pantry, Lets Play It Forward and was a major sponsor of the Somers Library Fair. We donated a bench in the Somers Unity Garden to memorialize the victims of Sept. 11th. We honor our veterans by placing a commemorative wreath at the Ivandell Cemetery on Memorial Day.

Every June the club holds an awards dinner where we recognize five outstanding Somers students for exceptional achievements. We also present a Democrat of the Year Award, Special Recognition Award, Chairman’s Award and Community Appreciation Award to deserving local individuals and organizations that have enhanced the community by their service.

Somers Democrats will continue to have an important presence in our town. It is our civic and moral duty to do so.